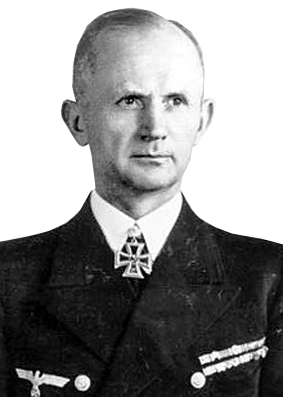 Karl Dönitz (sometimes spelt Doenitz) was born in Grünau near Berlin on 16 September 1891.

In 1940 he enlisted in the Kaiserliche Marine (Imperial Navy) and on 27 September 1913 he was commissioned as a Leutnantzur See (acting sub-lieutenant).

At the outset of World War I he served on the light cruiser SMS Breslau in the Mediterranean Sea. Dönitz was promoted to Oberleutnantzur See on 22 March 1913 and was temporarily assigned as airfield commander of the Dardanelles.

From  there, he requested a transfer to the submarine forces, which became effective in October 1916. He served as watch officer on U-39, and from February 1918 onward as commander of UC-25. On 5 September 1918, he became commander of UB-68, operating in the Mediterranean. On 4 October, after suffering technical difficulties, this boat was sunk by British forces and Dönitz was taken prisoner on the island of Malta.

It was while he was in a prison camp ear Sheffield that he formulated what he called Rudeltaktik (“pack tactic”, commonly called “wolfpack”).

He was only released from the British prisoner of war camp in July 1919, nearly eight months after the war had ended. He returned to Germany in 1920 and continued his naval career.

On 1 September 1933, he became a Fregattenkapitän (commander) and, in 1934, was put in command of the cruiser Emden, the ship on which cadets and midshipmen took a year-long world cruise in preparation for a future officer’s commission.

On 1 September 1935, he was promoted to Kapitänzur See (naval captain). He was placed in command of the first U-boat flotilla Weddigen, which included U-7, U-8 and U-9.

During 1935, the Weimar Republic’s navy, the Reichsmarine, was replaced by the Nazi German navy, the Kriegsmarine.

By November 1937, Dönitz became convinced that a major campaign against merchant shipping was practicable and began pressing for the conversion of the German fleet almost entirely to U-boats.

He advocated a strategy of attacking only merchant ships, targets relatively safe to attack. He pointed out that destroying Britain’s fleet of oil tankers would starve the Royal Navy of supplies needed to run its ships, which would be just as effective as sinking them. He thought a German fleet of 300 of the newer Type VII U-boats could knock Britain out of the war.

Dönitz revived the World War I idea of grouping several submarines together into a “wolfpack” to overwhelm a merchant convoy’s defensive escorts. Implementation of wolfpacks had been difficult in World War I owing to the limitations of available radios. In the interwar years, Germany had developed ultrahigh frequency transmitters which it was hoped would make their radio communication unjammable, while the Enigma cipher machine was believed to have made communications secure.

Dönitz also adopted and claimed credit for Wilhelm Marschall’s 1922 idea of attacking convoys using surface or very-near-the-surface night attacks. This tactic had the added advantage of making a submarine undetectable by sonar.

At the time the surface strength of the Kriegsmarine was much less than that of the British Royal Navy. Commander-in-Chief on the Navy Admiral Erich Raeder believed that any war with Britain in the near future was hopeless. He was quoted as remarking that all the Germans could hope to do was die valiantly.

Dönitz, in contrast, was not constrained by such fatalism, but set about intensely training his crews in the new tactics. He trained his crews under the most realistic conditions - in all weather at all times. Previously crews had been under instructions to attack a target from over 3,000 metres away. Dönitz had them fire at 300 metres.

The marked inferiority of the German surface fleet left submarine warfare as Germany’s only naval option once war broke out.

On 1 October 1939, Dönitz became a Konteradmiral (Rear Admiral) and “Commander of the Submarines” (Befehlshaber der Unterseeboote, BdU); on 1 September the following year, he was made a Vizeadmiral (vice admiral).

Although Dönitz was known as a brilliant naval tactician, his main contribution would eventually be as a leader.

Under him the U-boat arm would eventually achieve the highest standards of combat efficiency and seamanship. He enjoyed greeting a boat personally when it returned from patrol and speaking frankly with its crew - officers and enlisted men alike, to draw the proper lessons from the patrol.

Dönitz minimized red tape in order to present awards as soon as a boat docked, or even while the boat was still at sea.

With the fall of France he moved his headquarters to Kernevel near Lorient to be closer to his men. He made certain the crews had high pay and the best rations. He even had a special express train place at his disposal to ferry U-boat men on leave back to Germany - while Allied planes bombed the French ports, U-boat crews relaxed in far-away resorts.

He also facilitated communications to boost morale. BdU would often send messages to U-boats at sea with news from home. One man was informed of the birth of a son with the message “Arrived, one sailor. With periscope.” Radio weddings were even performed at sea, the captain officiated for the groom on board the U-boat while in radio contact with the bride and minister on shore.

Dönitz’ affection for his men was returned in full measure by the U-boat crews. The had great confidence in their admiral, and felt great respect for the lonely figure who so often greeted them on their return from the Atlantic.

The U-boat crews nicknamed him “Uncle Karl”, and sometimes referred to his as “The Big Lion”. So closely tied were the personal loyalties of the U-boat crews to the admiral that the branch was jokingly referred to as “Friekorps Dönitz”. This loyalty was a key factor in the U-boats continuing high morale and unflagging efforts even in the desperate closing months of the war.

On 30 January 1943, Dönitz replaced Erich Raeder as Commander-in-Chief of the Navy (Oberbefehlshaber der Kriegsmarine) and Großadmiral (Grand Admiral) of the Naval High Command (Oberkommando der Marine). His deputy, Eberhard Godt, took over the operational command of the U-boat force.

In the final days of the war Hitler had taken refuge in the Fuhrerbunker beneath the Reich Chancellery garden in Berlin. Reichsmarschall Hermann Göring was considered the obvious successor to Hitler, followed by Reichsführer-SS Heinrich Himmler. 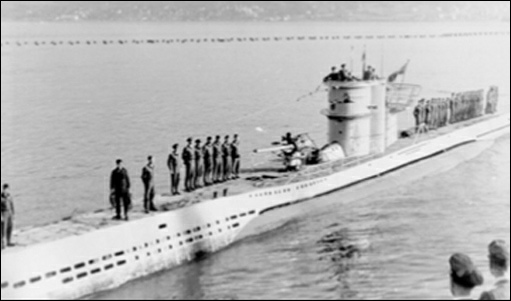 WELCOME BACK: When U-boats returned from patrol Karl Dönitz would often be waiting to personally welcome them back.

Both, however, managed to infuriate Hitler. Göring had radioed Hitler in Berlin asking for permission to assume leadership of the Reich. Then Himmler had tried to seize power by entering into negotiations with Count Bernadotte. On 28 April 1945, the BBC reported Himmler had offered surrender to the western Allies and that the offer had been declined. Hitler expelled both Göring and Himmler from the Nazi Party.

In his last will and testament, dated 29 April 1945, Hitler named Dönitz his successor as Staatsoberhaupt (Head of State), with the titles of Reichspräsident (President) and Supreme Commander of the Armed Forces. The same document named Propaganda Minister Joseph Goebbels as Head of Government with the title of Reichskanzler (Chancellor).

On 1 May, the day after Hitler’s own suicide, Goebbels committed suicide. Dönitz thus became the sole representative of the crumbling German Reich. He appointed Finance Minister Count Ludwig Schwerin von Krosigk as “Leading Minister”  and they attempted to form a government. On 1 May, Dönitz announced that Hitler had fallen and had appointed him as his successor.

On 2 May, the new government of the Reich fled to Flensburg-Mürwik before the approaching British troops. That night, Dönitz made a nationwide radio address in which he announced Hitler’s death and said the war would continue in the east “to save Germany from destruction by the advancing Bolshevik enemy”. However, Dönitz knew Germany’s position was untenable and the Wehrmacht was no longer capable of offering meaningful resistance. During his brief period in office, he devoted most of his effort to ensuring the loyalty of the German armed forces and trying to ensure German troops would surrender to the British or Americans and not the Soviets. He feared vengeful Soviet reprisals, and hoped to strike a deal with the western Allies.[17] In the end, Dönitz’s tactics were moderately successful, enabling about 1.8 million German soldiers to escape Soviet capture.

A day later, Dönitz sent Friedeburg to U.S. General Dwight D. Eisenhower’s headquarters in Rheims, France, to negotiate a surrender to the Allies. The Chief of Staff of OKW, Generaloberst (Colonel-General) Alfred Jodl, arrived a day later. Dönitz had instructed them to draw out the negotiations for as long as possible so that German troops and refugees could surrender to the Western powers, but when Eisenhower let it be known he would not tolerate their stalling, Dönitz authorised Jodl to sign the instrument of unconditional surrender at 1:30 on the morning of 7 May. Just over an hour later, Jodl signed the documents. The surrender documents included the phrase, “All forces under German control to cease active operations at 23:01 hours Central European Time on 8 May 1945.” At Stalin’s insistence, on 8 May, shortly before midnight, Generalfeldmarschall Wilhelm Keitel repeated the signing in Berlin at Marshal Georgiy Zhukov’s headquarters, with General Carl Spaatz of the USAAF present as Eisenhower’s representative. At the time specified, World War II in Europe ended.

On a personal level the war had cost Dönitz both of his sons.  The younger, Peter, was killed on 19 May 1943, when U-954 was sunk in the North Atlantic with all hands. After this loss, the elder son, Klaus, was allowed to leave combat duty and began studying to be a naval doctor. Klaus was killed on 13 May 1944 while taking part in an action contrary to standing orders prohibiting his involvement in any combat role. He persuaded his friends to let him go on the torpedo boat S-141 for a raid on Selsey on his 24th birthday. He was killed when the boat was sunk by the French destroyer La Combattante.

Dönitz was, for nearly seven decades, the only head of state to be convicted by an international tribunal until the conviction of Liberia’s Charles Taylor in April 2012.

Dönitz was imprisoned for 10 years in Spandau Prison in what was then West Berlin. Dönitz was released on 1 October 1956, and retired to the small village of Aumühle in Schleswig-Holstein in northern West Germany.

There, he worked on two books. His memoirs, Zehn Jahre, Zwanzig Tage (Memoirs: Ten Years and Twenty Days), appeared in Germany in 1958 and became available in an English translation the following year.

This book recounted Dönitz’s experiences as U-boat commander (10 years) and President of Germany (20 days). In it, Dönitz explains the Nazi regime as a product of its time, but argues he was not a politician and thus not morally responsible for much of the regime’s crimes. He likewise criticizes dictatorship as a fundamentally flawed form of government and blames it for much of the Nazi era’s failings.

Despite his postwar claims, Dönitz was seen as supportive of Nazism during the war. Several naval officers described him as “closely tied to Hitler and Nazi ideology.” He refused to help Albert Speer stop the scorched earth policy dictated by Hitler, and is also noted to have declared, “In comparison to Hitler we are all pipsqueaks. Anyone who believes he can do better than the Führer is stupid.”

Dönitz lived out the rest of his life in relative obscurity in Aumühle, occasionally corresponding with collectors of German naval history, and died there of a heart attack on 24 December 1980. As the last German officer with the rank of Großadmiral (grand admiral), he was honoured by many former servicemen and foreign naval officers who came to pay their respects at his funeral on 6 January 1981. He was buried in Waldfriedhof Cemetery in Aumühle without military honours, and soldiers were not allowed to wear uniforms to the funeral.

However, a number of German naval officers disobeyed this order and were joined by members of the Royal Navy, such as the senior chaplain the Rev Dr John Cameron, in full dress uniform. Also in attendance were over 100 holders of the Knight’s Cross of the Iron Cross.