One of my favourite television series is Dad’s Army. It’s a sitcom that ran for nine seasons and revolves around the men of the fictitious Walmington-on-Sea Home Guard Unit.

The Home Guard consisted of local volunteers otherwise ineligible for military service, either because of age (hence the nickname “Dad’s Army”) or by being in professions exempt from conscription.

The unit is led by Captain Mainwaring, the pompous, if essentially brave and unerringly patriotic local bank manager, Mainwaring appointed himself leader of his town’s contingent of Local Defence Volunteers.

His second-in-command is Sergeant Arthur Wilson, a diffident, upper-class bank employee who is very laid back.

Lance Corporal Jack Jones, the local butcher, is the oldest member of the platoon and saw action in the Boer War. One of his most heard expressions is “Don’t panic”, normally said while he is panicking.

Other members of the platoon include Private Fraser (a dour Scotsman who is the local undertaker), Private Walker (who runs the local black market), Private Godfrey (the platoon’s medic. Although a conscientious objector during World War I he served as a medic and won the Military Medal for bravery), and Private Pike (the youngest of the platoon, who Mainwaring refers to as “You stupid boy.”).

Anyone that served in the military will find the series funny, mainly because you will recognise characters that you came across.

While the series is a scream, the real Dad’s Army was not that funny. In Britain in 1940 the people were worried about a German invasion from the sea and from the air. They started to arm themselves with shotguns and any weapons they could lay their hands on.

The government decided it would be better to organise them into a proper army. In 1939 Winston Churchill had wanted a Home Guard formed - when he became Prime Minister in May 1940 he got it. Churchill had hoped for 500,000. He got 250,000 on the first day and 1,500,000 by June. They were first known as the Local Defence Volunteers - the LDV.

At first these untrained men were a bit of a joke. They weren’t given proper weapons, they just armed themselves with anything that could kill. One boy said: “We were set to defend a factory with broom handles. I pinched a knife from my mum’s kitchen and tied it to the top.”

One 14 year old boy took along a boy and arrow. That would have worried some German tank commander if the Germans really had invaded. Others took along a nice heavy golf club.

The government said Home Guard soldiers had to be aged between 17 and 65. But boys as young as 14 joined.

Some old soldiers from the First World War and before lied about their age and they were eighty years old. No wonder they were given the nickname ‘Dad’s Army’.

The men in Dad’s Army were keen. It was great that they were doing something to help, but sometimes they were a little too keen - and clumsy. Then they became Dad’s Disasters. 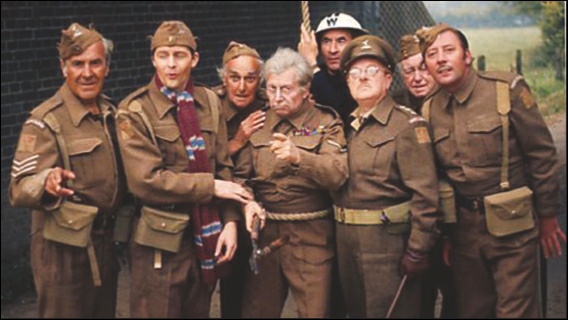 Home Guard soldiers were worried about how to spot a German. They were warned that enemy paratroopers might be disguised as a nun, a vicar or even a woman carrying a baby. The dumbest idea for uncovering a spy was to shout “Heil Hitler!” and no German would be able to stop himself from raising his arm, clicking his heels and replying, “Heil Hitler.”

Home Guards were in more danger from their own weapons than from the enemy who never arrived. They were given sticky bombs - a bit like explosive toffee apples on a stick. The idea was that they would run up to an enemy tank and slap the bomb onto the side. But many tried to throw the bombs, the sticks came loose and the bombs fell at their feet. 768 Home Guard members managed to kill themselves in this manner and nearly 6,000 were injured.

And their families were not safe either. More than one of them managed to shoot either their wife or one of their children while cleaning their rifles at home.

Early in the war Home Guard soldiers seemed to believe that anyone landing by parachute must be a German. An RAF pilot, James Nicolson, was hit by cannon fire from a German fighter. His foot was smashed and he was on fire. Yet he still managed to shoot down the enemy plane before bailing out. As he drifted down, wounded and still on fire, some Home Guard began blasting away at him with shotguns. Somehow he survived but was more injured by his Home Guard colleagues than by the enemy attack. Nicholson would go on to become the only Second World War fighter pilot to be awarded the Victoria Cross.

Home Guards saw spies everywhere. If you had a Hitler moustache you were immediately suspected of being a German spy.

School children weren’t safe. Alan Chadwick enjoyed going down to the local aircraft factory to watch new planes being tested. As Alan cycled near the fence a Home Guard ordered him to stop. When he didn’t the Home Guard fired a shot into the road. It bounced up and hit Alan in the back and killed him. Why hadn’t Alan stopped? Because he was deaf.

Some Home Guard soldiers saw themselves as a wartime police force. They set up road blocks to stop and question everyone who came that way. One man complained that he was stopped twenty times on an eight mile journey.

A government inspector was measuring a field one day when local villagers accused him of being a German spy. An old farm worker tried to protect the inspector and was shot and killed by a panicking Home Guard members. The inspector tried to show his identity papers but he was also shot. During the Second World War 50 innocent Brits died at the hands of the Home Guard.

It was probably even worse being a member of the German Home Guard, the Volkssturm. Karl Weiglein, a 59 year old farmer called up to serve, complained when the local bridge was blown up. “The people who did this are idiots and ought to be hanged.” But it was Karl that was hanged. His commander, the local school teacher, heard what he had said. Karl was hanged from his own pear tree outside his own front door while his wife watched from the window. The body was left hanging for three days as an example to anyone else who wanted to complain.