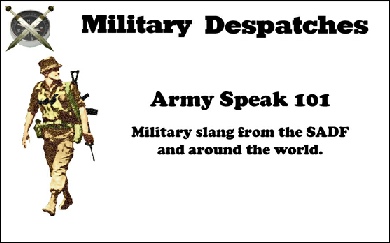 The military world-wide has always had their own way of doing things. And this includes having their very own language.
The South African Defence Force (SADF) used a strange mixture of Afrikaans, English, slang and techno-speak that few outside of the military could hope to understand.
Some of the terms were humorous, some were clever, while others were downright crude.
Other armed forces around the world also have their own slang terms.
This article looks at just a few of these slang names and terms. Obviously we had to leave out some of the more crude and offensive terms. But I’m sure most of our readers will remember them.
Here is but a small sample of military slang.